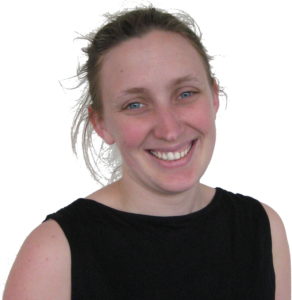 Tigger was one of the four new Masters of the 2010 cohort. She started her training in NO HANDS in 2006 at the very first TRANSFORMING TOUCH course at the Royal College of Surgeons in London. Little did she know the significance NO HANDS would have in her life when she arrived at that first course thinking to herself “Wow! The Royal College of Surgeons are so cool – they burn incense! I never would have guessed it…”

[And no, the Royal College of Surgeons doesn’t burn incense. But the NO HANDS Massage Company certainly does.]

I had my first experience of Massage at a party when I was in my late teens. Someone was giving clothed shoulder Massage and I asked if I could have one. I really enjoyed it and ended up chatting to the person who’d given me the Massage. They encouraged me to have a go myself – which I did with fairly positive responses. From those very humble beginnings I discovered I had some aptitude for Massage and  eventually decided to train professionally.

Gaining a first level qualification in Massage in the days when there were still plenty of local colleges offering courses meant it was fairly easy to fit it into my life (which at that point was working full time as a civil servant in Whitehall). Even at the time I remember being quite disappointed with aspects of the training – in particular the lack of focus on the client. It seems crazy – to teach a Massage course where the client is not absolutely central, where the client is merely “the person you’re doing the Massage on”, rather than the very centre of everything you’re learning to deliver. Anyway, I persevered and ended up with a professional qualification which enabled me to get a job as a Massage therapist on a cruise ship.

It was several months between qualifying and starting on the cruise ship but in the end I only managed about 6 weeks before getting severe RSI-type injuries in my wrists. I was never formally diagnosed but the intense pain and discomfort I experienced was proof enough for me that something was badly wrong. Before I’d started that job I had looked for some “injury prevention” tools and, ironically, had found Gerry’s first book (The Principles & Practice of NO HANDS Massage) but opted for a different one – because it was a couple of quid cheaper. Eek! Not my wisest moment, but c’est la vie. Said book did nothing to prevent my injury and rather than wait to be medically disembarked (which I had already seen happen to several colleagues, even in the short time I was there) I took the decision to break my contract and pay for my own flight home. My health and the very fabric of my body was, and is, worth so much more to me than anything that particular employment could offer me.

It was 9 months after returning from my “injury cruise” that I attended TRANSFORMING TOUCH and I confess, I really struggled on day one. I just didn’t get it. That said, having paid my money and feeling like there was something there I came back for day two and after a hard going morning it all slotted into place around lunchtime. And that was it – I was hooked.

I progressed through the levels of training as swiftly as time would allow – my initial concerns that I would struggle with the courses (as someone without a large Massage practice) were totally unfounded. The NO HANDS way of teaching meant I felt totally confident using what I’d learnt at the end of the course. For each stroke I’d seen it, felt it, done it repeatedly and had the support of the trainers when I was struggling with any aspect. Funnily enough, the one stroke that Gerry gave me some direct feedback on remains one of my favourite strokes and one I feel total confidence with.

I joined the Mastery Programme as soon as I could (2007) and in 2009 asked to be sponsored to go forward for the Master exam.  The assessment process has evolved significantly but interestingly the process I went through to get sponsored was very similar to our current process: I had my work seen by a Master in a session watched by the rest of the group and she then said she felt I was ready for the exam. I forget the exact reason but despite being sponsored I decided I didn’t yet want to take my exam and planned to take a year off from attending in 2010.

As it turned out, in February 2010 I started working in the Company office and about 3 weeks prior to the first module of the year went for a Massage with another local NO HANDer. It was a pivotal treatment – as I was coming around after the treatment I realised very clearly that I did want to be on Mastery that year. The next day I have a clear memory of calling Gerry to ask if I could rejoin Mastery: “I know it’s last minute, and I know the venue’s pretty much full, and I’d happily sleep in a tent in the grounds but please, please, PLEASE can I rejoin Mastery this year?!” Thankfully it was a thumbs up – no tent required. 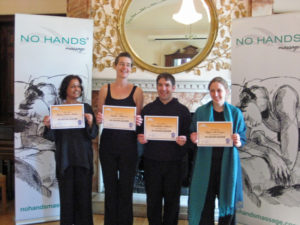 I feel so privileged to have been part of the 2010 cohort – 7 of us began the exam process, 6 got to the second stage and in total four of us became Masters that momentous July. Having the support of others going through the same process was so important to me – I had been a “buddy” for people going through the exam process before, but having exam-process peers as my support felt simply amazing, they really understood exactly what was going on for me!

My most heart wrenching moment of the entire weekend was leaving a dear friend, (at that point not-quite-yet) Master Sophie Atkinson, to wait for the final stage of her exam as I went to take mine. It was a beautifully sunny morning and we were sitting by the pond of the glorious old hunting lodge the exams were taking place at (Burton Manor in Cheshire) having kept each other company as the other candidates completed their own “Stage 3”, a viva voce. Because the same questions were asked of each candidate, we were required to remain separate from the group until our exam slot. There were three of us on the separated-from-the-group “candidates table” over breakfast (the first exam had taken place at 7am), and then Sophie and I spent a lovely hour or so in the gardens together before I went off for my exam. Leaving her at that point felt like an absolute desertion – but was simply the way the slots had been allocated. Thankfully we both survived the experience and within a matter of hours had both passed the third and final stage of the exam and were celebrating together as new Masters.

Looking back on a decade of involvement with NO HANDS it’s incredibly difficult to identify “the most important thing”, having learnt so much, on so many levels, in so many different areas of my life. The truth is there are many elements which stand out for me, including the straight, clear and Adult NO HANDS approach to Communication, the recognition – and promotion – of the absolutely essential “postural key” (and, indeed, “life key”) of Support, and the fact that in NO HANDS, the client really is the most important person in the room.

I’ve had the great privilege to interact with Masters, students, trainers and clients in a range of different ways over the years – as a student myself, as a Company trainer and, since 2010, in my role in the office and as a Master. Being able to serve a community of humans so committed to the NO HANDS mission statement of healing the world through the power of transformational touch is something I treasure in my life and is a huge source of fulfilment. Long may it continue!

Tigger is based in Dumfries and Galloway and continues to teach NO HANDS as well as the two-day NEUROTOUCH course.