NO HANDS Masters have completed the full journey from zero strain bodywork, through potent and transactional bodywork to being able to offer truly Transformational Touch Therapy. Master Robin Dalglish became a Master in 2009 and works in Cornwall.

In his own words… 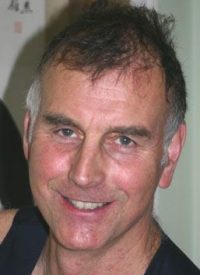 I came across the first volume of Gerry’s trilogy and was sufficiently intrigued and moved by it to book my first three days of training, at TRANSFORMING TOUCH in Cragg Vale in West Yorkshire. This was back in 2006. It’s hard to say what was so “moving” about the course but it was something about the energy dimension, something beyond the purely technical. I do recall that even before we learnt a single stroke, just  doing the postural keys exercises was emotionally challenging for me. It could have put me off, but it didn’t. And that emotional quality of NO HANDS touch has remained a significant element for me ever since.

It’s fair to say my career/ life path has been erratic. Born on New Year’s Eve, only child, boarding school, Oxford University to read Classics (not with unbridled enthusiasm), selling books for a couple of publishing companies (which largely sold themselves anyway), short stints working on a French barge and driving an overland double-decker tour bus (old style crash gear box) round UK then to and from Morocco, a short-service commission in the Army (taking in the delights of Northern Ireland, Germany and the Falklands), leaving the Army to go to Drama School (Bristol) and being an actor for the next 15 years (no, not famous), getting married somewhere in that lot (1984 in fact), spending 7 years in Budapest with my family (spouse, 3 kids plus 1 more born there), lots of massage there, back to UK, decided to learn massage, first basic Swedish massage course, followed by Traditional Thai massage (sen lines and stretching), LaStone Therapy (the original hot and cold stones), then NO HANDS. 1500+ hours of training etc later, here I am, Master Robin.

My client base was pretty minimal before I came across NO HANDS: friends and family and one or two others. I was committed, keen to explore, finding my way, serving my clients, but didn’t really see myself developing a proper practice until I discovered NO HANDS.

Since 2006 when I started my NO HANDS journey my practice has grown substantially. Not just grown but deepened. How come? It’s a really sound approach to the delivering of zero-strain massage, in a very supportive environment, with continuous learning, both before and after becoming a Master. I’ve also benefited from the significant business building support available (materials, ideas, marketing tools, SUPPORT etc.). So for quite a while now I have been seeing between 10 and 20 clients a week, and many of my clients have been with me either from the very beginning, or at least for several years.

Becoming a Master had a significant impact on my confidence. It showed me that I can do this stuff, that I can use the tools I have been given, I can communicate clearly from my Adult, I can be seen because I am worth seeing. I am proud to be engaged on a journey of potent body-work. It has given me the confidence to own my strengths (and actually, my weaknesses too).

First of course I needed to master classic NO HANDS, the tools of the trade, the individual components, and only then as a Master start to imprint them with my own particular stamp. Each massage I give now is recognisably NO HANDS but is also uniquely Robin. Since becoming a Master, I have gradually gained the confidence to fly with my massage, to access all of me in that flow, to respond to the messages I am getting moment by moment from the client’s tissues. After all the courses and repeats and clients and feedback, being recognised as a Master has helped me gradually find my truth and work from that authentic space, from my heart as well as my thinking brain. It’s been a combination of hard work, and reliable technique, and soul. Discipline and freedom.

As others have said, Mastery is not an end in itself, it’s not about joining some exclusive club where we sit about smugly polishing our laurels. It’s just another starting point, like my very first TRANSFORMING TOUCH course back in 2006 at Cragg Vale, eating my lunch on a tombstone in the cemetery outside, wondering what I had got myself into. It’s realising that each massage I give now is a starting point, that each time I’m a client on the table it’s a new beginning. Make it real. Make it matter.

Recently however I have arrived at a watershed. We’ve moved 300-odd miles from Cheshire to Cornwall. I still have a yurt (two in fact, one north one south – convenient really) and still have a client base in Cheshire (watching in some dismay as I head off down the M6 ….) I do have a few exceptional clients down here in Trevone but I’m dithering. It takes time to build up a base of really good clients all over again, and at a mere 64 (a spring chicken, I know!), is the R-word coming into play?!?  However, NO HANDS is so much a part of my life now that… it’s a part of my life now. Watch this space. 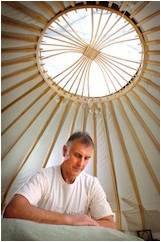 Anyway the important point is that NO HANDS is a seriously wonderful foundation upon which to  build whatever practice you want. Size (of client base!) really doesn’t matter. What matters is the quality of your touch with each individual, making a difference, continuing to learn about touch with each massage, letting the touch in as a client, sharing the masterful magical mystery tour of Touch with anyone up for change, being willing to breathe, bold and sensitive enough to really feel the Touch, courageous enough to really let go. That means you as a client as well of course.

I was asked to share one piece of information or advice that I thought might be helpful to other therapists to which my response was “Just the one? I could go on for hours.” But I’ve got it down to 1 + 5 extras:

Ultimately for me, yes it’s about the client, yes I’m focused on giving the best massage that I can in this particular here-and-now to this particular client. But it’s really about two people, an intersection of two lives, two energies, two histories, which will never be the same again after this touch – for either of us. NO HANDS has provided me with a context to understand this, and the means to embody it. That is why I have devoted so much time and money and energy to Mastering this approach to touch, to honouring this experience, to sharing myself with another in this way. With humility. With a sense of wonder. With integrity.

Be yourself. Be seen. Be the best. Be Masterful.