Anxiety and stress can cause absenteeism and lowered productivity levels. The economic cost of this can be hard to measure. However, one study in America showed that anxiety and stress was costing top companies over 25 billion dollars a year (Palmer, 1990).

These stress related costs show that any measures a company can take to reduce the effects of stress on its employees could have a real impact on their company’s overall success.

Stress is endemic to the workplace – no surprise there! 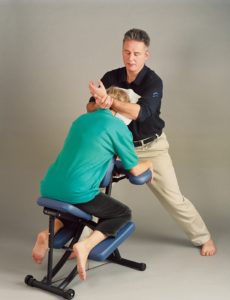 It is unlikely that stress will ever leave the workplace. Even under normal circumstances, the workplace is an inherently stressful environment. Whether this is due to deadlines (real or self imposed), presentations (and the associated fear of public speaking), disagreements with colleagues or staff, and the constant need to recreate to stay viable in the marketplace, it’s real.

What matters is how a company can help to reduce the impact of that stress on their staff. Numerous studies have shown that reduced anxiety levels in employees can lead to better morale, improved productivity, better decision making and ultimately better performance (Lazarus, 1963; Steers & Black 1994).

But stress CAN be managed

Increasingly companies are embracing stress reduction programmes which vary widely from such activities as exercise and relaxation to visualisation techniques, time management training and counselling.

In particular, one study shows why Massage is now emerging as one of the successful and surprising favourites in this battle against stress in the workplace. This is perhaps one of the reasons why companies such as Apple, AT&T, Warner Lambert and Heinz all embraced Massage as part of their stress reduction programmes even in the early days of such programmes existing.

Shulman & Jones investigated this impact in their 1996 study. Thirty-five members of a large manufacturing organisation were offered Massage, and their stress levels were measured using well known anxiety tests. The findings revealed just how powerful the effects of Massage in the workplace can be. The Effectiveness of Massage Therapy Intervention on Reducing Anxiety in the Workplace: (K. A. Shulman & G.E. Jones ),  Journal of Applied Behavioural Science , 1996 Vol 32 Pt II pp 160-173

Participants (there was also a control group) were given a 15 minute clothed massage every week for 6 weeks by two Massage therapists who had been trained by the same school and followed almost identical procedures. To reduce the effect of individual idiosyncrasies they even swapped over their clients half way through.

Anxiety levels were measured before, during and after. What this study showed was that anxiety and stress were significantly reduced by Massage. There was an even spread of gender, job seniority and knowledge/prior experience of Massage with the control group. All participants showed above average levels of stress before the study began. By the end of the study, the Massage group were displaying well below average stress levels – in contrast to the control group.

Following the end of the study, stress levels did rise for the Massage group but not back to the pre-study level. This suggests that regular Massage has a cumulative effect and that had the Massage continued for longer, this residual effect could have been even more profound and longer lasting.  In this sense, Massage needs to be treated in a similar way to a physical exercise programme by employers – keep it going for as long as possible to reap all the benefits.

Why Massage works so well 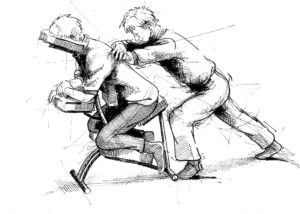 One explanation as to why Massage works so well is because of the connection between stress, anxiety and muscle tension. One of the physiological symptoms of stress is muscular tension. Repeated over time, this tension will cause a loss in muscle elasticity.

This loss of elasticity (muscles are actually composed of elastin fibres) means that they lose the ability to release. There is no ‘bounce’ or resilience. This leads to a difficulty in releasing tension which can produce the chronic problems of back and neck pain (Greenwood & Greenwood 1979).

Another more simple reason is that we live in a largely touch starved society, and even fifteen minutes of touch a week enables the body to rebalance itself in ways too numerous to measure. Another advantage if muscle tension is relieved at the workplace – soon after it has appeared – then the stress has had less time to embed itself into the body’s tissues (Pyves & Woodhouse 2003).

The Benefits of Massage in the workplace

Most of these claims are based on the feedback from employees participating in Massage programmes.

The main study featured in this article (Shulman & Jones, 1996) also reports the feedback of participants as indicating that the benefits were felt throughout the day, with stressful situations being handled much better as a result of the Massage. The benefits of Massage had more carry over into the job than the control group (who had breaks instead of Massage).

One study showed that a 27 minute slow back Massage reduced anxiety in nurses (Longworth, 1982).

A third study examined the effects of a single 1-hr Massage on the physiological measures of stress. In the induced stress exercises (after the Massage), the Massage group showed significantly less stress than the control group. It also showed that Massage improves performance and has a positive impact on the office atmosphere (Levin, 1990).

A fourth study also measured the effects of a single 1-hour Massage which backed up the study above (Glaser, 1990).

A fifth study demonstrated the positive effects of a daily 10 minute neck and shoulder Massage over 6 weeks. The control group took a break instead. The Massage group displayed a far greater reduction in stress levels (Gale 1992).

The proof of the pudding is in the eating

No matter how much scientific evidence is available, the best way to assess whether Massage
can help your organisation is to try it out for a 3 – 6 month period and take the views of staff and management.

One 15 – 20 minute session per week per employee over a 12 – 24 week period will give you a good idea of its many benefits. In particular look for increased productivity, a more creative atmosphere and calmer working environment. Look for reduced absenteeism and a reduction in conflict in the workplace. Notice how staff respond to the employer who takes them seriously enough to reward them with massage. Staff retention is a major issue in many companies and this aspect of Massage should not be underestimated.