Living with the “R” word

Living with the “R” word

By Gerry Pyves, Founder & Creator of NO HANDS Massage

Right from the off I hated it when my clients said that what they wanted from their Massage treatment was to feel “Relaxed”. I realised very soon in my career that using this word was simply a way of either hiding or avoiding answering my question “What do you want from this Massage?”

“But why?” I asked myself. “Why not just say what you want from the treatment?” Now, to be clear, I am not writing about those clients who innocently used the ‘R’ word as a colloquialism without realising they had just transgressed one of Gerry’s sacred laws of Bodywork, namely

These accidental “R” word users are different because they are always happy to respond with some very real specifics when I then ask them my stock in trade follow-up question:

“So just what would that mean for you – to feel relaxed?”

These accidental users would come out with phrases like “looser neck” or “straighter back” or “breathing more easily” or any one of the million ways that Massage can change us. These are things I can work with as a Massage therapist!

No, I am writing about those clients who respond to the follow up question:

“So just what would that mean for you – to feel relaxed?” with things like “Oh I don’t know really, just more relaxed, really.” Or words to that effect.

Did this client ever arrive into your treatment room?

If you have the persistence to keep asking for more specifics, these clients either retreat deeper into themselves and become more and more silent (withdraw) or they start to get belligerent and even challenge my right to ask such questions (attack).

Over the years, as I broke myself against the hard rock of their use of the “R” word, like the Atlantic waves crashing against the Irish coastline, I came to see things differently. As I began to accept their difficulty and get to know these clients better, I discovered that something else entirely was going on.

Far from being willfully obstructive or arrogant, these clients were actually showing me something incredibly important about themselves and the bodywork they needed.

Firstly, I realised they must keep coming back for a reason.

They would not tell me that reason – no matter how often I asked, but there was still a reason. No one gives up £40-£50 of their hard earned income and spends a few hours of their life getting naked under the hands (or in my case, the soft parts of my forearms) of another person for no reason at all. In my own supervision, my supervisor asked me the important questions, “If they could tell you, what reason might they give you for coming and what reason might they have for not telling you?”

What emerged, as I fumbled clumsily for an answer, was the realisation that perhaps there was a very good reason for this difficulty in saying what they wanted to feel at the end of the treatment.

We are talking about a difficulty with outcomes, here.

One day a reporter sidled up to Walt’s brother at the opening of one of their latest theme parks. Walt had died a few months earlier and the reporter said to his brother “What a shame Walt never lived to see this…” His brother looked at the reporter with disdain and said: “What are you talking about? Walt saw this every day for over five years. If he had not seen it, you would not be standing here.”

This made me think about the importance of dreaming. The Aboriginal peoples of Australia even talk about “The Dream Time” as an actual space in which we can live and create our purpose in life. If we cannot dream a thing, how can we ever act on it? Dreams give us the blueprint of our lives. After the dreaming comes the expression of the dream. First it comes in words and sharing those words with others and then it comes in plans and then it comes in action.

Very often the problem with achieving what we want in life, is that we do not give our dreams enough space to emerge. We need to walk in the dream time. This is the first and most important step to living our true purpose in this life. Yet how many of us allow ourselves to do this? How often are we rushed into action and told to achieve things? How often are we told to “stop dreaming and get on with life”?

As I thought about this, I began to see my clients refusal to use anything more than the “R” word as a fear of dreaming. To ask our clients for an outcome is to invite them to dream of their future. Even if it is only a small dream of a future just 40 minutes away, out on the other side of the Massage, still we are asking them to picture a future that is made entirely by them.

And then I began to understand the real issue. Supposing these clients had grown up in environments where dreaming was considered a dangerous thing? Supposing their family structures and belief systems were based around past generations who had needed to sacrifice dreaming for mere survival?

When does a dream or hoping for an outcome become dangerous? 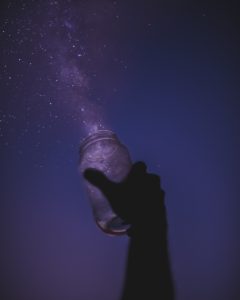 What about when people are attacking you, your family or your race and the only smart thing to do is to “keep your head down”? What if you are Jewish and are being hunted and exterminated for your religion by Nazis? In this context dreaming could very well kill you. As I began to see that my clients were walking into my treatment room with the shadows of the whole horror of world history on their shoulders, I began to understand not only my privilege in dreaming but their pain of not dreaming.

Just because we are no longer living in the times of the Irish famine or cholera outbreaks or racial cleansing and warfare, do not think that our family belief systems have adapted to the new and hopefully improved living situation. It is well known in psychotherapy circles that it can take many generations and much therapeutic input to change a family’s belief system. Many families stay stuck in beliefs and habits of upbringings that apply more to the past than the present.

Which means that clients arrive into our treatment rooms carrying the survival behaviour patterns of past generations, and this may make dreaming feel like a highly dangerous thing to some clients.

So now, I am much gentler and much softer. Actually I no longer mind the “R” word at all. Hearing it and seeing it in action only opens my heart and invites me into deeper understanding and patience with these clients. They are not difficult clients at all.

The only difficulty was my lack of understanding.